Can violence in gaming be educational?

This weekend's tragic event in Tucson has triggered a number of national conversations for the past few days: one around mental illness, one around violent rhetoric in the modern political scene... and one, that's always going on somewhere in the background, about American gun culture, including the presence of gun violence in our media.
Over here, a number of us discussed all these factors at length.  In that discussion and in another thread, the commenter sara_l_r raised the following:

My boyfriend's theory in more depth, and I think there's a lot to this, is that lots of people learn about guns from movies and TV rather than from gun instructors or people who actually know what they're doing.  ... TV and movies have absolutely horrendous gun safety and don't accurately depict what happens to your body when you get shot. ... He thinks that if films and television did a better job of showing how guns work and what happens when you actually get shot, people would be aware of what they can actually do and would therefore be much more careful, both of their own bodies and of others.

I was intrigued by this line of thought, particularly as a counterpoint to the more common (and, I believe, false), "violent movies and video games cause kids to become violent people" trope.
And on thinking about the "reality" of guns in media, I immediately went to Heavy Rain.
Heavy Rain features four player characters.  Among their stories, the player sort of tag-teams the narrative, coming at the fundamental story -- a serial killer has kidnapped a young boy and there are only a few days left to rescue him -- from a number of angles.  Occasionally their stories intersect (players A and B or B and C will appear in the same chapter).
One of the four player characters is FBI profiler Norman Jayden: 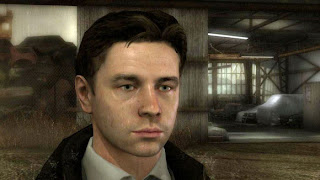 Jayden's role is a fairly archetypal one.  He investigates the crime scenes and works with a database of evidence to put together a profile and likely locations of the killer.  His partner is Asshole Cop Variation A, Lieutenant Carter Blake.
Jayden and Blake seek out and eliminate multiple possible suspects on the road to solving the case.  One of the first they visit is Nathaniel Williams.  As you can see (click to embiggen -- the split shot is original to the game), Nathaniel is... not quite right. 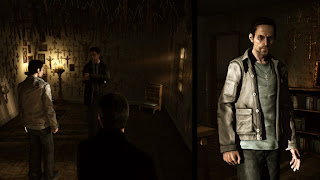 The situation develops into a tense and intense triangular standoff with Blake, Nathaniel, and Jayden.  Jayden pulls out his gun; Nathaniel may or may not himself have one.  Neither Jayden nor the player knows for sure.
All of the commands here are optional -- R1 is the gun's trigger, and X, O, triangle, and square provide options by which Jayden can attempt to defuse the situation: 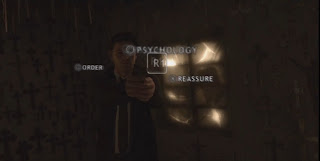 But here's where the game, I feel, is unusual, and where the educational component comes in: to shoot is completely optional.  The game does not require or demand it at any time, just as the game frequently gives you the choice to act or not to act (and makes this explicit in the tutorial Prologue).  R1 is an option, not a command.  Most players tend to have a finger hovering over or near R1 when holding a Playstation controller, and in particular during this scene.
The really important part?  Without fail, every player I have seen with his or her finger near R1 flinches and shoots Nathaniel when he makes a sudden movement.  And almost every single time, the player immediately shoots, "Wait!  Damn it!  I didn't mean to do that!"
For all that we spend a load of time in gaming with the virtual gun in our hands, for all that we learn to speak caliber and reload speed, for all that we collectively play first person shooters and third-person bloodbaths: one game puts us in the position that real law enforcement officers face all the damn time, creates a situation where we can shoot almost against our will, without meaning to, and then immediately makes us sorry for it.
Heavy Rain manages to create an emotional moment where the lives of the player character and his partner both depend on a split-second, hair-trigger, almost gut-level decision being made -- and it's a moment that reflects a reality that gets people killed with alarming regularity.
I don't know if this kind of game could ever reach the audience that would most need to think about what it shows.  But if a scene like that lingers, and makes any of us think about the reality behind the story... can that ever be a bad thing?
---------------
Bearing in mind that the writers of video walkthroughs can make a number of different choices along the way, if you'd like to watch the scene here's one where you shoot Nathaniel and one where you don't.
Posted by K. Cox at 8:42 PM