Holy crap, what a jam-packed weekend.  Welcome, new readers and viewers from Twitter.  This is going to be a very long post, with loads of photos, so I'm availing myself of the seldom-used jump function.  Also, for those who are interested in a more coherent perspective, I recommend Maddy Myers's Boston Phoenix series, particularly her Sunday overview.
Also, as it turns out... this happened, haha.  In truth I am pretty certain that Lesley and Dennis (and others) out-tweeted us, but apparently we're just the best and most consistent users of the #paxeast hashtag. ;)  If you want to get a real feel for what I was thinking as the convention happened, Twitter's the place.

My trip to PAX East 2011 did not have an auspicious beginning.  My flight from DCA to BOS was supposed to be wheels-up at 6:00 p.m. but I didn't get out of DC until 9:30, getting me to my hotel Quite Late Indeed.  Luckily my friends had leftover wine, cheese, and cookies waiting (from an event they'd done earlier that evening) so I got to recuperate.
FRIDAY
6:15 Friday morning, up bright and early.  As you can see, the weather in Boston was delightful. 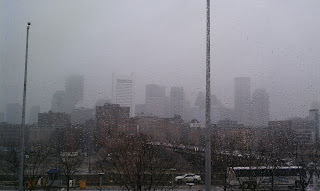 Folks in line and on Twitter were discussing delayed flights and stopped traffic.
We queued for the Main Theater and attended Jane McGonigal's keynote presentation. 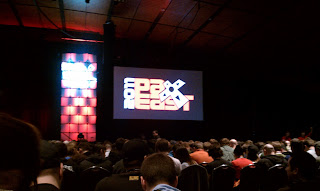 The view from our seats in the main theater pre-speech. Yay PAX!
She was an interesting speaker, and worth listening to; her speech took the angle of looking at the correlations between postitive in-game behaviors and positive real-world behaviors, rather than the negatives we usually hear (i.e., violence).  However, I felt that her keynote had a down-side.  While in 2010 Wil Wheaton's presentation focused on the aspect of PAX as "home" and the gamer community as, indeed, a community, McGonigal's was... more dry.  She was buoyant and into it, but the cozy and communal feelings I picked up in 2010 weren't there, and I felt that really affected the tone of the con.  Or maybe that was the 3300-seat main theater. ;)  She gave a similar presentation, for a different audience, at TED.
Immediately after the keynote was the first Penny Arcade Q & A panel, featuring Mike and Jerry.  I am forced to say that I gave up after 25 minutes and left.  It had become a never ending stream of two queues of worshippers at the mic.  Every "question" was actually, "I love you; now have this thing I made / brought from my foreign land / ordered just for you."  I got sick of the deification and bailed to go meet some people. I later heard via Twitter that in fact, later on some actual questions were asked and answered, including one regarding the Dickwolves fiasco, but have yet to see an actual transcript or video so can't report.

We wandered around for a while, exploring the venue, and then settled on attending Parsely Games.  Clearly, this session was attended by a high number of gamers under 25 who had never seen a text adventure in their lives (and thus missed the "parse" element of the title), and also by some jerks who thought sexist princess-related comments were funny, but overall it was a blast and I might have purchased Action Castle I and II for playing at parties.  Because that's the kind of party I throw. ;)  Friday at PAX then concluded with tours of the expo hall and a general look around (and ended with dinner in Chinatown). 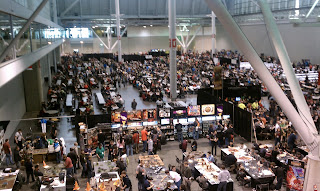 The view of the tabletop freeplay / tourney room, from the floor above.

SATURDAY
Saturday was going to be our expo hall day.  We joined the queue room around 8:15 to run straight for the Portal 2 booth at opening.  Although the rumors of a playable demo were erroneous, the videos within were pretty damn awesome. 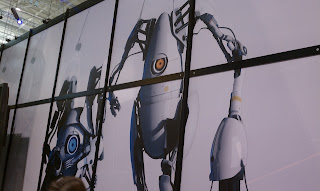 The outside of the Portal 2 booth.
I'm sure the video will be online shortly, if it's not already, but they showed us the first 6 minutes of the game, straight up, and followed it with a pair of character introductions for the non-GLaDOS voices who will be guiding you along your journey.  (GLaDOS no longer being in the guiding sort of mood, with you.) 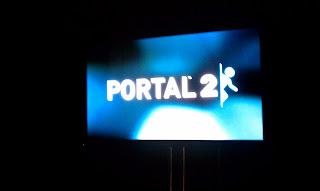 Triumph, huge success, etc.  And yes, I got the T-shirt.
The remainder of our plan for Saturday was the pair of gender-related panels: Females on Female Characters at 3:00 and The Other Us at 6:30.  We met up with Lesley Kinzel in the early afternoon and then four of us tackled both of these together.  (Five for the 6:30 panel, as Dennis Scimeca, gaming journalist and Lesley's husband, joined us for that one.)  Before and between, we went to tabletop freeplay and learned Innovation, which was quite fun.

Unfortunately, the conversation had tones of misogyny and body-snarking that made it uncomfortable.  "Eat a sandwich" comments were thrown out about slenderly-animated characters early on, and "skinny bitch" and "dumb bitch" comments floated around more than once.  Although it was an improvement over last year's "Girls in Gaming" panel, it wasn't the panel that any of us were looking for.

On the other hand, "The Other Us" exceeded all our expectations and had us nearly dancing with glee in our seats.  Alli Thresher did an excellent job in moderating, contributing valuable insights and keeping the panel on track.  I absolutely love this write-up, from a male gamer who didn't have a feminist perspective going in the door.  One of the questioners also delivered, deadpan, perhaps my favorite understatement of the weekend, regarding online trolls: "A significant portion of the community thrives on invective." 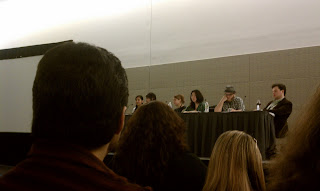 Between the two photos, you can make out all 7 panelists. These people were fantastic.
The panel could easily have run another two hours and I'd have been happy, but that's not the way these things work.


[G4 now has a VIDEO OF THE PANEL.]
It ended on a high note, reminding all in attendance that feminism isn't a dirty word, and can help the gaming community evolve to its next level.  Ideas from both of Saturday's panels will be featured in the upcoming character chapters of the "Beyond the Girl Gamer" series.  "Females on Female Characters" may have pissed me off, but it also gave me a restructured outline so for that I thank it. ;)  After the panels, J and I made our way back to the hotel and then joined one of my oldest college friends for dinner in the North End, before returning to tackle console freeplay for a while.


P.S. - when there are 50+ XBox 360 units in a room, wireless controllers can get cross-synced.  The dudes across from us playing the FPS were momentarily confounded by the motion of their guy... because I was trying to roll a Katamari, haha.


SUNDAY
Sunday began with the Girls' Meetup, a huge brunch.  I met a number of delightful women of all ages.  One brave girl delved into her closet, remembering the games of the 1980s, and brought some with her.


That's right: the women of PAX East, in 2011, gathered around their bacon and mimosas... to play Heartthrob. 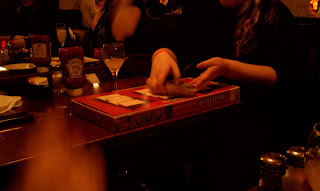 I did not play, but it was very funny indeed.
A number of us then headed back to the expo hall together to catch the noon panel, One of Us.  This panel was diversity themed, featuring speakers of different races, sexual orientations, and physical ability.  Everyone noticed that we were in the smallest theater, and that the 5 panelists had only 2 mics among them... a subtle message about the perceived value of the panel, or just poor planning?

Though the panel began in a very dry, academic, and even (I hate to admit) dull mode, it soon picked up as the panelists warmed to their subject, and we collectively settled in.  This was the meaty panel, high on critical theory and deeper-level discussion.  Looking for discussions of intersectionality, heteronormativity, and ableism?  This was your event.


[Gamespot now has a VIDEO OF THE PANEL.]
In the end, it became a really robust discussion about when gamers in a minority population (which for gamer culture, includes women) hang out in their like-minded "walled gardens," and when we fight for tolerance and acceptance in the broader sphere.  Community moderation and leadership were key topics, and in chatting afterward I told several folks interested in good examples of community leadership to check out Ta-Nehisi's place.

Afterward, the group I was with, now including Beth, went off to tabletop freeplay.  I joined them after finally (after three days of missing each other) managed to connect with Donna Prior, who I had known online as a friend of a friend for years.  It turns out that community managers travel in packs (and bring Frag Dolls with them), so I briefly met and unexpectedly exchanged cards with a number of other fine folks as well.

Then I went back to join the others for a few rounds of gaming. 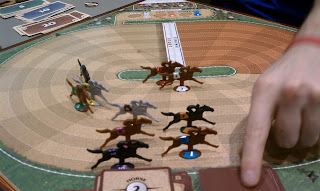 Go ponypony, go!  (My horse came in 3rd, as did I.)
Overall, it was a tremendous experience and I'm so glad I went.  I got to meet a number of amazing people, and I seem to have picked up about 25 non-bot new Twitter and blog followers.  I look forward to chatting with you all, and I hope you'll stick around for the promised BTTG series. :)

And now, I hope to continue sleeping for another 3 or 4 days.

[EDIT: I was so focused on trying to remember what I did that I forgot to mention what I saw.  Namely, Team Respect, and loads of PAX attendees, both male and female, wearing pink wristbands.  Also, Twitter was angry about the booth babes, and I liked Alli Thrasher's comment about them.]
Posted by K. Cox at 10:13 PM