Inferior Quality: Not for Structural Use!

[The following post begins with and contains a number of huge spoilers about L.A. Noire and in particular its last act, and so is behind the jump for those who wish to avoid such things.] 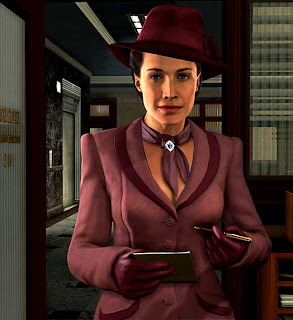 It was the middle of an ordinary afternoon when she walked through my door.  She sauntered into my office with a walk that would make any red-blooded man stop and stare: dark blonde hair, green eyes, and legs that wouldn't quit.
"Mr. Kelso?" she asked.  She had a German accent -- not something you hear much of in Los Angeles these days.
"That's what the sign on the door says, miss," I replied.  I closed the file I was working on.  Without another word, she handed me a folded letter.  Somehow, I had a feeling my day was about to change.
***

Just under a third of the way through L.A. Noire, I commented that it didn't feel or behave like a film noir.  Rather, I felt it was a modern story -- and a gaming story, at that -- clumsily wearing a noir's clothes.  I was right to say so at the time, and I was equally right to conclude that the game is Ace Attorney: Grand Theft Auto, set in the 1940s.  For the first 80% of the game, that's really how it feels and how it flows.
But there does come a moment where L.A. Noire suddenly well and truly transforms itself into a classic noir story.  The music, the visuals, and the writing all click into place and suddenly the player can almost hear Gil McKinney calling up his best Humphrey Bogart impression for a narration that doesn't exist.
And there lies the catch.  McKinney doesn't play Cole Phelps, who has been our hero and our player character until now; he plays Jack Kelso.  Kelso's a man with secrets... many of them about Cole himself, from the time they knew each other in the war.
*** 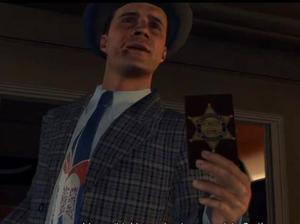 She told me a story about her friend and a settlement.  Touching, I'm sure, but I didn't see how it was my problem.  But then she slid herself into the seat in front of my desk; this dame wasn't going anywhere without an answer.
"I want you to investigate this case.  I feel my friend may have been the victim of foul play."
I gave up.  Besides, she was easy on the eyes and I didn't mind keeping her around a few minutes longer.  "Okay.  Let me look at the case file."  I found it and flipped through it for a minute.  Sounded like her "friend" took a hell of a fall -- but I was going to need to know more.
***
We've examined the genre of film noir before: it's the story of a man's downfall, and of society's.  Whether the man has good intent or evil intent doesn't really matter; society is twisted and confused around him to the point where his story becomes part of a web of lies and wickedness.
Cole Phelps ascends rapidly through the ranks of the LAPD, cracking case after case.  He's a hero and a do-gooder; passers-by on the street praise his work and comment on how they recognize him from the papers.  Los Angeles may harbor its dens of villainy, but he's going to right wrongs, rescue kittens, defend virtue, punish evil-doers, and fight for truth, justice, and the American way!
Of course, in order to make this a noir, Phelps must have a downfall.  Like so many men, he's brought low by a beautiful woman -- in a sense.  Unlike the stereotypical or archetypal relationship with a femme fatale, though, Phelps's affair with Elsa is entirely his own doing.  We never have any indication that she once approaches him or asks him for anything; he brings himself to her.
And while the game gets really meaty and engaging during and after Cole's affair with Elsa, that's also where any shreds of coherence it might have had go flying out of the window.  The B plot -- the story of an eminent domain money-grab, the building of the highway system, and corruption in business and government -- ties together very well with the C plot (stolen morphine), and the intricacies of the story told through newspapers ties neatly into the story of Cole Phelps.  It's the story of Phelps himself that doesn't wash.
***
I had to ask how she knew her "friend," Buchwalter.  I sensed there was something to the story -- supposed they had been more than friends.  "You expect me to re-open this case because you come in here walking that walk?" I asked her.  "Well I'm not buying it.  I think you should tell me what the hell is going on." 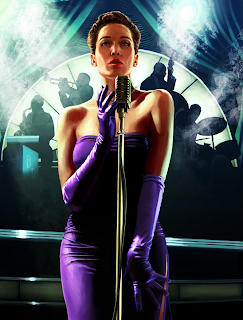