So, my husband and I play games together.  It's a good way to be a gamer.  At any given time, we'll each have a "me" game (or two, sometimes a handheld as well as a PC / console title) and a running "us" game that we play together.
Our most recent "us" game was Syberia, which I'd played before but never to the end, and we've started on Syberia II.  (And I'll be writing about the character arc of Kate Walker soon, after I see where it finishes.)  But in-between, the gods of GameFly sent us Uncharted: Drake's Fortune, and as I am unable to resist an Indiana-Jones-style adventure, it went from "his" game to "our" game right quick.  And by "our" game, I mean, "he played it, and I made fun of everything and also occasionally spotted snipers for him."
See, here's the thing.  Most modern offline games (particularly in the genres we enjoy) are not multiplayer in any sense (and if they do have a multiplayer mode, it's online and large).  So a dedicated gaming team finds creative ways to share the play.  With the God of War titles, our co-op strategy has me roaming through corridors killin' stuff and pullin' levers to see what happens, and has him doing boss fights and timed events.  Why do we land on this particular division of labor?

(This is not why we land on this division of labor.)
My major failing as a console gamer is that I was not, in fact, a console-using gamer until late 2008.  I'm a PC gamer.  My parents couldn't and then wouldn't buy me an NES when I was a kid, so I didn't even beat Super Mario Brothers until I was 13 and bought a used one from a friend for $25 worth of my babysitting money.  But we had a computer in the house since 1985, and from mazes to math games to Tetris, I was hooked.  I methodically played through the adventure games of the 1990s and loved them, then started downloading text adventures through AOL and seeing what that had all been about.

So, the good news is that after the first year of us having a PS3 in the house, I managed to get the hang of both walking AND running using analog sticks.  Later came jumping, when the two of us methodically played our way through the entire Metal Gear Solid series, with him on the controller and me providing the Mystery Science Theater 3000-style commentary.  In MGS2, he repeatedly kept (unintentionally) throwing Raiden into a chasm, and smartass me took the controller and cleared the jump on my first try.  Sure, we were robbed of the joy of throwing Raiden into a chasm, but I had just had my first successful PlayStation controller experience.

And then somehow, later, we ended up playing God of War (all of them).  So how did my husband end up responsible for all the QuickTime events? 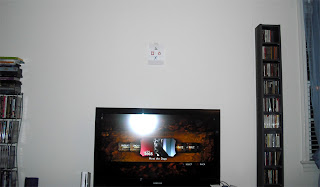 Nice TV.  Husband was going through the special features of Uncharted at the time.  But wait -- what's that right above the TV? 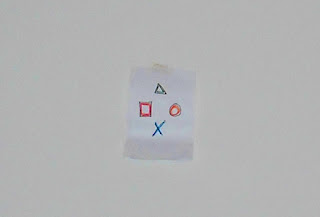 This is the open-book monument to my shame.  Because in my head, the square is on top, and the circle is god-knows-where, and by the time I've figured it out, the event is over, the boss has eaten me, and I have to start all over again with that damn sea serpent.

So.  We each play to our strengths!  I can solve puzzles, I can mash buttons, he can tolerate endless dialogue, and he... knows which button x is.

I swear, I'll get there someday.

Or maybe I'll just be using WASD to get through my next game.  Yeah, that sounds like a better plan.